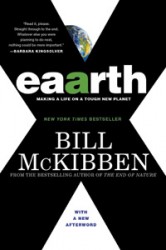 Below is an excerpt from the letter written by the students in the Honors Read Tutorial who selected the 2014 Honors Read Eaarth by Bill McKibben.

Eaarth, by author and activist Bill McKibben, illuminates the state of the civilization we currently live in and the direction we are heading.  Eaarth is spelled in such a way because the author is asserting that we no longer live on the same planet as we used to.  Due to rapid climate change – caused by manmade pollution – we are living in a new environment; this new planet is one that we may not be able to cope with.  McKibben integrates ecological, political, and societal causes for this situation we find ourselves in; he analyzes the global market and how competition among countries and businesses clashes with the need for cooperation to deal with this massive problem before it’s too late.

As you are reading this perhaps you let slip a groan of disappointment, a scoff of incredulity.  “Really?” you might be thinking, “more hippy-dippy whining about saving the polar bears, thanks but no thanks.”  Though this text is about climate change and shows current environmental issues, it is also much more than that.  Bill McKibben details the societal reasons as to why we are here: the ideal of growth, our insatiable consumerism, and a political atmosphere that is non-conducive to reversing the damage already done have put us in a whole heap of trouble.  The reality of global climate change is not up for discussion; however, what role we should play as individuals and as a society is.  This book shores up the argument by providing statistics of the rapid change we are causing.  Natural disasters will increase in intensity and frequency and start occurring in places historically void of such things.  Hurricane Sandy has recently shown this to be possible by hitting New York City.  Can you imagine a serious hurricane making it as far north as Portland, Maine?

Bill McKibben unifies the previously scattered and sensationalized idea of climate change into a terrifyingly clear message: we have ravaged Earth, leaving in its place a new, alien planet that we may not be able to live on.  Climate change is not only an issue for our children or our grandchildren; this was an issue for our grandparents and our parents.  We have inherited their problem; the immediacy of this problem cannot be overstated.  McKibben offers hope and proposes tentative solutions but it is the responsibility of every individual to live in a way to reduce their impact.  Outside of receiving a liberal and broad education from the Honors College we want to inspire morally and ethically engaged citizens who will think critically about the important issues.  We hope this text will ignite in you a passion for the life around you and for becoming a citizen of the world: it did for many of us.