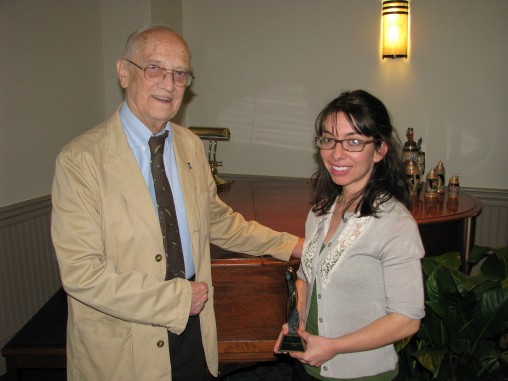 Professor Richard Hill was selected to give the 2010 Visiting Scholar in Ethics lecture, which was held in the McIntire Room of Buchanan Alumni House on April 21, 2010. Professor Hill came to the University of Maine in 1946 as a Professor of Mechanical Engineering. At UMaine, he was known for his ability to make engineering concepts come alive. Across the state, he is recognized as a trusted authority on energy matters, particularly as an expert on nuclear energy.

In his early 90s, Hill relies on his bicycle as his primary means of transportation. He credits his longevity to “half an aspirin a day, a low-fat diet, lots of exercise, and living in a state of total outrage.”

He is shown above with Andrea Gammon ’10, who was the 1st place winner of the John M. Rezendes Ethics Essay Competition.

Gammon’s essay was entitled “Google’s Panopticon.” Her paper explores the role the Google search engine casts of the individual who stands before it, and the ethic the individual must take to ensure undistorted access to information in the digital age. (Read the full essay online.) Gammon received an original sculpture as part of her prize, below. 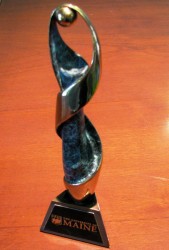 Dennis Rezendes ’57 established the John M. Rezendes Ethics Initiative funds in the University of Maine Foundation in 2000 to honor his father John and in recognition of his father’s strong ethical values and beliefs.