This past summer, Emily had the fantastic opportunity to work at the Neighborhood Early Childhood Center, kicking off her teaching career at her old stomping grounds. She was able to practice art and music related teaching strategies and is happy to say that the experience has made her more confident in pursuing a future in education. With the unique last year that many students had, given our predominantly remote circumstances, spending your second year on a college campus can feel just as extraordinary and exciting as it does for those embarking on their first year as an undergraduate student.

Chase Empsall is a second-year Honors student, double-majoring in Political Science and Economics. Chase is among the described group that, “feels like a freshman even though I am a sophomore.” Originally a New Yorker, he now lives in Saint Johnsbury, VT. His high school experience there, as President of the Model UN club, championing their statewide Government and Civics competition encouraged him to stay involved here at UMaine. Empsall is now a member of Young Americans for Liberty, a student organization, and Circle K International, a service and leadership group here in Orono. Chase is happy to say that, “being on campus has been a wonderful experience as I have met new people and joined clubs.” As a student also in the Honors College, Chase appreciates how, “despite how vigorous the courses can be; it [the Honors program] broadens points of view for all to better understand the world,” and is excited to stay connected to his community as we all come back to learn together again.

Before coming to UMaine, Julia Muth (now a second year Honors student) spent a year in Germany – an experience that has significantly shaped how she now learns and enjoys life here in Orono. Muth lived with a German host family and went to a 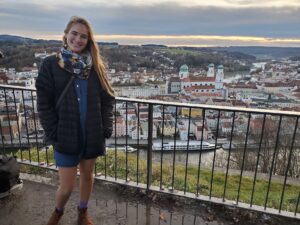 German high school, where she cultivated confidence and independence. “At times it was challenging having to speak German 24/7, especially towards the beginning,” Muth noted, even sharing once she thought someone was, “recruiting her for a basketball team, but in reality they were hitting on me.”  She had so much fun along the way, but amidst a foreign culture and language, Muth says she, “learned a lot of discipline for doing school work,” now helping her as a student to “focus more on the learning aspect and the meeting friends to study with.” Muth is now in her second-year at UMaine, studying Chemical Engineering with a minor in Environmental Engineering. She is a member of  Black Bear Robotics, Engineers Without Borders, the Technical Association of the Pulp and Paper Industry Association (TAPPI), American Institute of Chemical Engineers (AICHE), the Maine Outing Club, and, of course, German Club.

Michael Furtado is a third-year Honors student here at UMaine. Despite his rigorous course load studying Mechanical Engineering with a concentration in Aerospace, he “recently took the leap of faith and signed up for a frisbee tournament with the Ultimate Frisbee team,” this past weekend here at UMaine. It can be quite intimidating to join a team or club for some students, and Furtado acknowledges his own struggles that prevented him from joining a highly-competitive activity such as Ultimate Frisbee. “It’s a big step for me,” said Furtado, but he is very excited to have some fun on the field with his friends and new teammates. Furtado also supports clubs such as the Young Democratic Socialists of America (DSA) and Divest UMS, a student organization working towards the divestment of the University of Maine System’s assets in the fossil fuel industry.