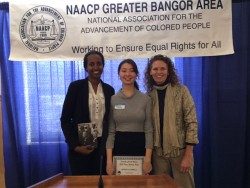 Honors student, Antonia Carroll wins Dorothy Clarke Wilson Peace Writing Prize for her poem, Still Stirring. She was presented the award by Sarah Marx, director of the Wilson Center at the 2016 Dr. Martin Luther King, Jr. Breakfast Celebration that was held on Monday, January 19 in Wells Commons. Her powerful reading of the poem, which deals with themes of racism, gender discrimination, and gun violence, greatly moved the audience of nearly three hundred. Like those submitted by the other finalists, Carroll’s work  was a response to the quote from Sojourner Truth, “So I am for keeping the thing going while things are stirring; because if we wait till it is still, it will take a great while to get it going again.” While confronting difficult themes and depicting both ancient and recent episodes of violence, the poem highlighted the solidarity essential to the movement for social justice in this country. Antonia is a senior International Affairs and Chemistry double major and has studied extensively in Japan.