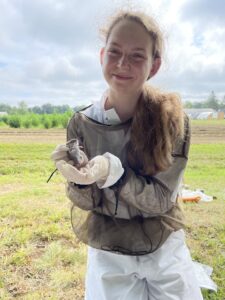 Willow Throckmorton-Hansford is a third-year biologist, concentrating her undergraduate courses with a Pre-Medical Studies track. This past summer she worked in the Dr. Gardner’s Vector Biology Lab at UMaine, assisting in multiple research projects focused on vector-borne diseases. One project examined the effects of climate change on tick populations by collecting information from black legged ticks attached to small mammals and analyzing tick’s fat content and winter mortality. Throckmorton-Hansford was also involved in an experiment collecting information about the local mosquito population, critical research that will be used in the future by the CDC. She enjoyed the chance to make strong connections with the citizens of Bangor as she set traps on local properties to determine the mosquito population density and species distribution, now looking to identify the species of the mosquitos that she collected.

Throckmorton-Hansford was just accepted into the Tufts Maine Track Early Assurance Program –  a competitive program that assures selected candidates admission to medical school while they are still undergraduate students and without an MCAT score. She shares that her, “passion for helping the people of Maine was expanded over the summer,” as she got to work closely with the Bangor community, so she is, “beyond excited to pursue medicine in this state to attempt to close the gap in healthcare availability.” Check out the other ways she gets involved and some of her work as an author, here, on HerCampus. 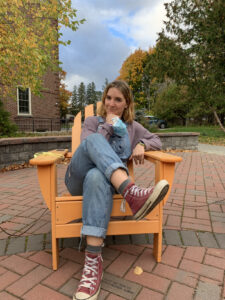 Evie Clement is a fourth-year Communications major, minoring in both Psychology and Communication Sciences and Disorders, in the Honors College. In addition to captaining the UMaine Women’s Ultimate Frisbee Team, Clement loves cooking with her roommates, doing things outdoors, and has recently become, “obsessed with watching all the squirrels in her backyard.” This past year, Clement was chosen to serve as a research fellow with the Maine Drug Policy Research Fellowship. This opportunity supports independent research to review legislation, provide testimony for state and local lawmakers, and engage with stakeholders across the local, state, and national level. Her area of research focused on the ways stigma impacts our perception of drug use and people who use drugs, specifically the way this can create a barrier for healthcare providers to utilize Medication Assisted Treatment. “Political science and policy have not been a part of my academic experience thus far,” so Clement was eager, “to explore a new area of knowledge and see a new interdisciplinary perspective.” She hopes that her work can help shift policy perspectives from punishment to health, promoting well-being for all Mainers.

Check out Clement’s op-ed in the Bangor Daily News: Punishment is not working. It is time to treat people who use drugs as human beings. 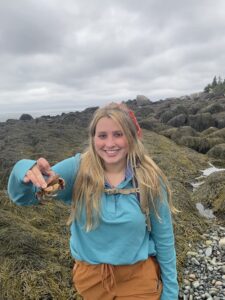 Kayla McLagan is a Ecology and Environmental Science major with a concentration in General Ecosystems andMarine Science. As a second-year, she helps to welcome students to campus as a member of Team Maine, as the Black Bear Leader of the Sophomore Eagles, as Vice President of Best Buddies, and as an ambassador for the Ecology and Environmental Science department. Her love for the outdoors stretches into all aspects of her life; McLagan works as a Resident Assistant for the Outdoor Adventure Community (living with first and second-year students who share a deep appreciation for outdoor recreation), she is part of the Maine Outing Club, the Event Coordinator for the Horticulture Club, serves as Social Media Chair for the Backcountry Squatters, and is the sitting President of the Hammock Club! McLagan recently received a Lab Technician position in the Olsen Lab as part of the CRASSH Collaborative research project. McLagan says she is, “incredibly excited for this opportunity,” to gain research experience and, “cannot wait to learn more about marine ecosystems,” by evaluating the role of rockweed in food-web dynamics, conservation of rockweed, and it’s sustainable harvest.

Julia Whinston is a fourth-year Philosophy major in Honors, minoring in theater. She serves as Levinson Ambassador for the Department of Philosophy and is on the council for Maine Masque, an entirely student-led collegiate theater company. 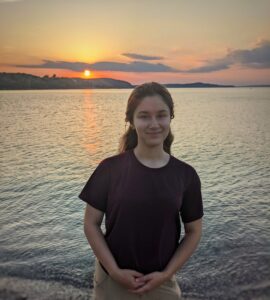 Earlier this month, Whinston facilitated a dialogue at the Wilson Center on the topic of Diversity, Equity, Inclusion, & The Natural Landscape. Through her role as Levinson Ambassador, she helped to coordinate a wonderful evening of discussion that recognized, as she put it, “the slippery slope of environmental ethics.” Whinston mentions that, “philosophy and critical thought truly begin with discussion,” and that the event & it’s attendees, “certainly helped me develop my thinking and graciously pointed out some of the shortcomings of my own language. Semantics matter here. I left the discussion feeling enriched and hoping that they all felt the same, and were able to take something away from all we had just explored.”

Ryan O’Leary is a second year here in the UMaine Honors College studying Social Work with a minor in Art. He is a recent recipient of the John Ferdinand Steinmetz Memorial Award, given annually to first-year Honors students demonstrating outstanding character and appropriate need. O’Leary also serves as an officer for the Permaculture and Gardening Club and is a house resident of the Terrell House, a UMaine Permaculture living & learning center. 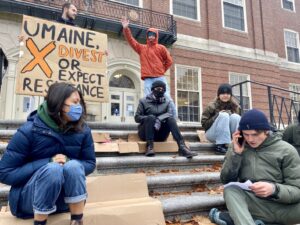 O’Leary is known as a driving force behind the student organization Divest UMS. He leads as the groups’ Vice President, organizing the efforts in motion to encourage the University of Maine System to fully divest its current investments from the fossil fuel industry, and to raise public awareness and support of fossil fuel divestment as a broader movement. Stemming “from [his] growing love for our beautiful state of Maine,” O’Leary’s passion for environmental and climate activism drives his commitment to the group’s pursuit, adding that he believes that “we all hold to take a deeper look into the injustices in systems around us, and to 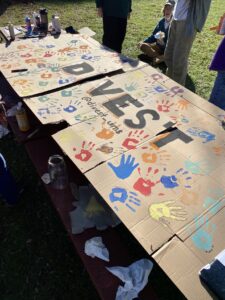 rally enough people around those injustices until changes come to fruition.” The UMaine group just wrapped up a successful week of action (Nov 8th – 12th) that included a variety of actions and workshops leading up to a Climate Strike on the UMaine Mall on Friday. Friday’s strike brought student and faculty speakers to discuss different aspects of divestment and the urgent need for climate justice along with student-led songs and chants, before concluding with a march around the University Mall.

The group and their efforts are gaining momentum and quite a bit of local attention; see articles in Maine Public, the Portland Press Herald, and Maine Beacon. To learn more about Divest UMS check out their website here.

Elizabeth Mazzie is a first-year Honors student with a Marine Science major, concentration in Marine Biology and Oceanography, and a minor in Music. Mazzie plays on the UMaine Women’s Soccer Club, competing in the NIRSA Region 1 North Division all over New England. She is also involved in Wilde Stein, a student organization aimed to spread awareness and support the acceptance of sexuality, gender, and the LGBTQIA+ community across the UMaine campus. Mazzie was recently accepted for an internship in Costa Rica next summer, where she will have the opportunity to study sea turtles and their nesting habitats.