Annually since 2002, the Honors College at the University of Maine has endeavored to host a distinguished Honors graduate for a several day visit. The visit typically includes in- and out-of-class conversations with members of the Honors community as well as other interested students and faculty. The Distinguished Honors Graduate Lecture is the campus-wide highlight of their visit.  Between 2002 and 2008, this initiative was sponsored by TIAA, which returned as a sponsor in 2015. 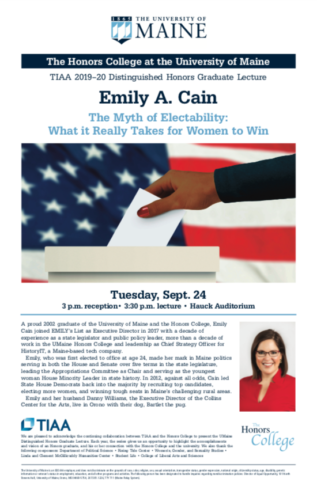 “The Myth of Electability: What it Really Takes for Women to Win”
September 24, 2019

2014-15 – Dr. Amy Benoit Frappier ’99H
Associate professor at Skidmore College in the Department of Geosciences, serving as Charles Lubin Family Professor for Women in Science
“The Natural Philosophy of Hurricanes in the Anthropocene”
February 2, 2015