Alumni and Faculty in the News – March ’22

Associate Dean of the Honors College led a book discussion on Becoming Nicole as part of the Orono Public Library’s No Pre-Reqs series, March 8, 2022. She was joined by Edward Feeney, a first year Honors student. This is the third year in a row Ladenheim has led the discussion.

Jazlyn Dumas, recent UMaine Honors alumna ‘21, is the principal investigator and lead author of a study published in February in the Journal of Consumer Behavior. Dumas conducted this research as part of her Honors thesis, titled “The Importance of a Checkmark: An Investigation Into the Perceptions of Social Media Verification and Its Effects on Consumer Trust,” also receiving the CUGR business award for undergraduate research. After graduation, Dumas continued to work on her thesis research with the help of Dr. Rusty Stough, Libra Assistant Professor of Marketing. This new research shows that verification isn’t always a positive, as social media consumers associate verification 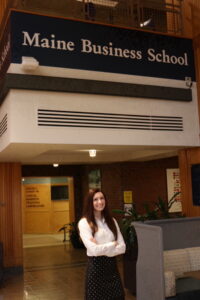 more with celebrity than credibility and are much less likely to trust product endorsements from verified accounts if the content is inconsistent with the influencer’s brand.

She shares that her time at UMaine – spent as a sister in Pi Beta Phi, serving on the board of the Order of Omega Honor Society, and on both the Club Basketball and Club Field Hockey teams – was “filled with fond memories and growth, both personally, and intellectually. I’m deeply grateful for my experience in the Maine Business School and the Honors College which was truly the catalyst for my research. I was able to make great connections, learn a lot about an area of interest, and see the process of submitting and being accepted for publication which has been invaluable.” Dumas now works as a marketing and social media specialist for the Marden’s Surplus and Salvage corporate headquarters in Winslow, Maine.

Emma Newcomb, recent UMaine Honors alumna ‘21, is the co-author of a UMaine-led study published in the journal Conservation Science and Practice looking at the past several decades of reported incidents of seal stranding and the types of human impacts, including harassment, observed on stranded seals. In a recent article, Newcomb shared that “many of the stranding reports for animals that were harassed showed that the harassment was done with the best intentions, people believing that the animal required intervention and wanting to help the animal,” and believes that this information will help inform public outreach and education initiatives to better protect Maine’s seals.

As a student, Newcomb was a member of the Marine Science Club, was involved in research in the Cammen Lab, and worked as a TA and an MLA in the School of Marine Sciences. She shares that she is so grateful for her time at UMaine – as it gave her “research opportunities that have completely shaped my career and my life. It has always been a dream of mine to research marine mammal strandings, and UMaine gave me the chance to make that dream a reality.” Newcomb is now an Ocean Health Fellow at the Pacific Marine Mammal Center in Laguna Beach, California where she studies marine mammal necropsy and volunteers with the rehabilitation patients. She hopes to pursue a graduate degree in the near future, studying marine mammal behavioral ecology.

Graduate students of the University of Maine School of Social Work, including UMaine Honors alumna ‘18 Alli O’Neil, recently authored an OpEd in the Bangor Daily News (3.11.22) entitled, “To ease the opioid epidemic, Maine needs to strengthen its Good Samaritan Law”. The article calls attention to the potential that Maine has to decrease the number of deaths from drug-related overdoses by expanding the Good Samaritan Law, which protects those who overdose or those who seek medical assistance for a person experiencing an overdose.

This team from the Maine School of Social Work is working alongside community partner, the Margaret Chase Smith Policy Center, to research differential risks for opioid overdose deaths in Maine using data from the State Unintentional Overdose Reporting System to help identify missed opportunities for intervention and systemic failures to better inform care for those with substance use disorders. The goal is to identify different risk factors for subpopulations to help inform the Overdose Fatality Review Panel in developing protocols that will improve care for those at risk for opioid overdose death. O’Neil adds that through the MSW program, she has learned, “about the importance of advocacy and the responsibility social workers have to participate in the legislative process in the state of Maine. I have had the privilege of working alongside a team of MSW peers to learn about the Good Samaritan Law in Maine and how I, as well as others, can be active change agents to better protect and advocate for and alongside those who are vulnerable.”

Alli O’Neil, LSW-C is a Master’s of Social Work student at the University of Maine with anticipated graduation in May 2022. O’Neil graduated summa cum laude from the Honors College with a degree in Sociology, a concentration in Crime, Law and Justice, and a double major in Spanish. Her specialization year field placement is with the Bangor School Department at Vine Street Elementary. She has experience working with children and families as a child welfare permanency caseworker, and with antepartum and postpartum patients as a hospital social worker at Northern Light Eastern Maine Medical Center. O’Neil is also a member of Phi Alpha Honor Society and of Phi Kappa Phi and, since 2017, has been involved in the Servant Heart Research Collaborative. The Servant Heart Research Collaborative was created through the Honors College at the University of Maine to address specific educational and experiential challenges facing children in Sierra Leone; through this project, O’Neil helped in the development of a six-part series of workshops on attachment theory for caregivers working with displaced and orphaned children in Africa.