Thanks to an extremely generous gift from Dennis and Beau Rezendes, each year the University is able to host the John M. Rezendes Visiting Scholar in Ethics and to offer the John M. Rezendes Ethics Essay Competition.  For the first three years of this initiative, it was administered by the Department of Philosophy.  Coinciding with the inauguration of the Honors College, the initiative was relocated here for the 2002-03 academic year.  We are exceedingly grateful to Beau and Dennis Rezendes for their generosity which enables us to bring these visitors to the University of Maine and provide these opportunities for all students at the University.

The Visiting Scholar in Ethics is a scholar who can address ethical issues of national importance.  During her/his stay, the visitor is asked to conduct a seminar with selected Honors College students, conduct a seminar with selected students in a department or college related to the visitor’s field of interest, and present the John M. Rezendes Ethics Lecture to the University community and the public. 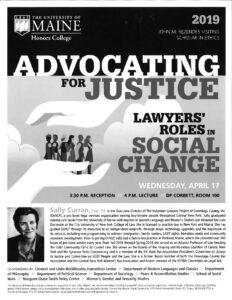 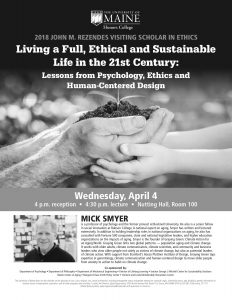 Professor of Psychology at Bucknell University 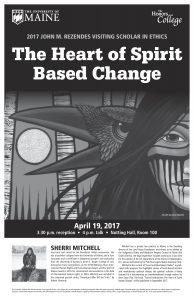 Lawyer and activist for indigenous rights. Founder of the Land Peace Foundation. 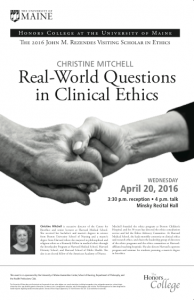 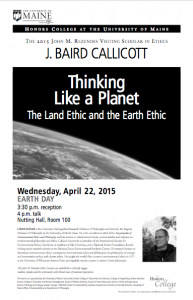 University Distinguished Research Professor of Philosophy at the University of North Texas. Co-editor-in-chief of the Encyclopedia of Environmental Ethics and Philosophy. 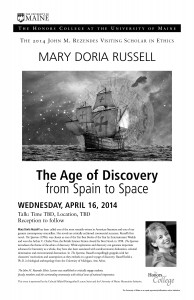 Arthur Serota ’66
Co-Founder and CEO of the United Movement to End Child Soldiering
To Look the Other Way or Not:  Ethical Choices We Make
(2 April 2013) 2008-09
Robert Shetterly, Creator of the Americans Who Tell the Truth series of portraits
The Ethic of Collateral Damage
(24 April 2009)

2005-06
Lily Yeh, Professor of Art and Art History at the University of the Arts, Philadelphia
Beauty, Ethics, and Community Building
(19 April 2006)

2003-04
Professor Lijun Yuan, Texas State University – San Marcos
The Ethics of Care and Social Policies: A Dialogue on Gender Across China and the U.S.
(22 April 2004)

The Ethics Essay Competition began as an opportunity for undergraduate students to compose an essay on the theme of “Ethics in the Public Domain.” Starting in 2010, students are asked to address a theme related to the topic of the Rezendes Lecture. The essays should describe a problem and the ethical issues at stake, presenting a carefully reasoned and informed argument about how the problem should be approached and resolved while responding to serious objections that might be offered to the author’s point of view.  The submissions are judged by a panel of faculty members from the University, and the winning essayist is presented with a $2800 award and an original engraved sculpture.  For more information about entering the competition, click here.

Links are to Adobe Acrobat (.pdf) versions of the winning essays.

Using Utilitarian Theory to Improve Our Food System, Our Planet, and Ourselves

Theme:  Impacting Nature: The Ethics of Energy, Ecology and the Environment

2014
Theme: The Ethics of Discovery
Kate Spies (English)
Voices: Morally Addressing the Conflict in the DRC Through Kantian Ethics

2013
Theme:  The Ethics of Globalization
Gwen Beacham (Molecular and Cellular Biology)
The Ethics of the United States’ Clinical Trials in India

2008
Seth Toothaker ’11 (Food Sciences and Human Nutrition)
Free from the Cave: From Cruelty to Compassion

2005
Dylan Montgomery ’07 (Chemistry)
A State of Equality: The Legislation of Same-Sex Marriage in Maine

2001
Nicholas Robertson ’03 (Philosophy)
Wittgenstein, Education, and the Value of Literature